Last night at dinner I had noticed several delicious breakfast options on Greens menu and wished to return. Our backpackers is wonderfully located within walking distance of several great restaurants, but since Alex decided that is was my Cape Town day, I wanted to go Greens. We walked around the corner and sat outside in the warm sun. It was such a beautiful day with clear views of Table Mountain. I order French toast with berries and bacon and Alex had scrambled eggs with bacon and chocolate muffin. The meal was a great start to an enjoyable day in Cape Town.

We walked down Long Street towards the Waterfront stopping into a book shop, music store and a couple of clothing stores. I did find a charm bracelet with a soccer ball, vuvuzela, and the continent of Africa on it that I thought I might want, but when I tried it on we discovered it was not silver and had some discoloration.

Near the bottom of Long Street we cut over and made our way to Green Point Stadium. We walked through Fan Mile, which was very impressive and made Alex regret that we had not come to Cape Town for a World Cup match.

Having walked for awhile we need to relieve our thirst, so we popped into the Spar on Fan Mile for a drink. WOW it was like no other Spar we had ever seen. A comparison for those back in the States it is the difference between walking into an old non-remodeled Safeway and a Whole Foods or a Wegmans. It was very first world as Elna would say.

Alex had been under the impression that we might be able to take a tour of Green Point stadium now that FIFA had departed, but we never found any open entrances or visitors center to inquire about it. The stadium looked very proper and from all the sign posts around we inferred that it must have been well organized on matches, unlike some of the stadiums we attended. One thing that really impressed me was all the recycle bins around the stadium, Waterfront and Fan Mile. I don’t recall seeing any recycling bins anywhere in 2007 and very few this time while traveling around the country.

We continued our walk of Cape Town along the Atlantic Ocean to V&A Waterfront. It looked the same as it did in 2007 except for a few more hotels and condos/apartments. We wondered around, stopping into a few shops, but only walked away with a few stickers and a ZA flag soccer bag. Almost every store had sale signs covering the windows, but when we went inside there would be one rack of sale items- it was very deceiving. Nike was having a real sale of 30% off the entire store, but much to Alex’s dismay there was nothing he wanted.

In the afternoon we found our way to Haagen Dazs Ice Cream for yummy chocolate chip cookie sundae and a waffle with chocolate ice cream before going to see Death at a Funeral. Ironically I saw the original Death at a Funeral 3 years ago in Cape Town. The remake was enjoyable, but we knew all the surprises in the plot, so it wasn’t as funny.

It was still light out when we emerged from the theater, so we decided to save our money and skip the cab. On our trek up Long street I decided that we should go to the Royale Eatery for dinner. The restaurant had been recommend by lonely planet as having unique and delicious burgers and Fabio had also given it a thumbs up. RE burger menu was extensive, including almost 40 burger options about 8 of which were vegetarian burgers.  We ordered a pitcher of mojito and two burgers. I had a delicious steak prego with white wine and garlic sauce, Swiss cheese and peppers with sweet potato fries (so good). I greatly enjoyed my meal. Alex thought his beef burger with grilled vegetables was very taste, but his order had been messed up. He was given two beef patties when he ordered a single and instead of potato wedges he was given sweet potato fries, which he hates. We would have asked the waitress to at least change the fries, but she never came back. In fact she didn’t serve us our food and didn’t come to check on us until our plates had already been cleared. In addition, when she did finally come by she asked if we were ok with drinks, nothing about the food. It was a bit disappointing that the services wasn’t up to par with the food. 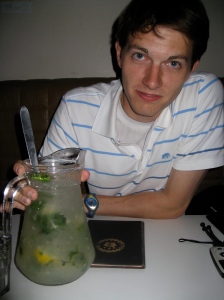 Alex with his Jug of Mojito at Royale Eatery

Back at Cape Town Backpackers we laid down on top of the comforter for a quick rest before going to the Internet cafe.

… We didn’t make it to the Internet cafe. Woke up at some hour of the night with the lights still on and the door unlocked. Took care of those and went back to sleep.

2 thoughts on “A Beautiful Day in the Cape”