This year has been one of fantastic adventures and difficult challenges. Alisa and I began the year in Washington DC having started entry level jobs at the most innovative technology company on the planet, but with no real plan for the future other than to save up and return to Africa, where hopefully we would find employment. When the email came from FIFA on the 5th of February notifiying me that I had won tickets to all the matches I had submitted for during the random drawing, it gave me what I thought would be new purpose to life. I finally had confirmed tickets to return to the country I had fallen in love with only 3 years earlier. It would finally give me a reason to book my plane tickets and set off, hoping that Alisa would tag along for the World Cup part even though she sought to find a ‘real’ job in Washington DC. The year took on new meaning when just seven days later, I received another email accepting me into the African Studies Program at the University of Califorinia – Los Angeles.

I had lost hope of getting into graduate school when I saw my GRE scores flash on the screen the previous December. I thought I had blown my money on apps and the test as well as the chance to improve my chances for ‘real’ employment in the near future. So when UCLA sent the confirmation email of my acceptance, I was relived and surprised that I had got in. That surprise grew when just a few weeks later I learned that the Masters of Public Diplomacy at the University of Southern California had also extended it’s acceptance letter to me. Suddenly I had a reason to return to the United States after the World Cup, and I set out to convince Alisa to embark on this journey of a lifetime.

Obviously, if you’ve read any of the blog, you found that I was successful in dragging her along, but it took up until the night of the 23rd of June (after 2 weeks in Mozambique and 2 weeks in SA) before she said she appreciated my work in persuading her to come along. That night happened to be the scene of perhaps the most dramatic win in the United States’ long but undistinguished international soccer history, when a goal was scored in stoppage time to send the US through to the next round as Group winners (click for the blog post). That dark, cold night at Loftus Versfeld will surely stand out as one of the most joyus of the year for me, and perhaps of the decade. To be so close to seeing the reason we had trekked 13,000 kilometers  be eliminated at the first hurdle was heart-wrenching, yet made the explosion of relief and jubliation mean that much more. I distinctly remember thinking that all my work in getting there, everything I had saved up, was about to come to naught if the US crashed out in the group stages and went home in shame. I thought South Africa had set up so beautifully for me to be part of a special tournament, and Donovan’s goal kept that hope alive (This clip is shot from nearly exactly where I was sitting). 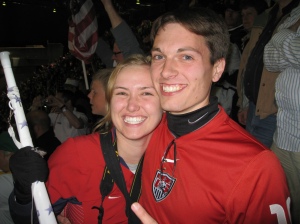 Alisa and Alex in Pretoria

Unfortunately, that highest of highs was doused in uncustomarily quick fashion with a quick turnaround and extra-time defeat to Ghana up in Rustenburg ending our World Cup with a cold hard slap across the face. We soothed our heartache by heading to see the beauty of Mpumalanga and then returning to plan a last minute journey to Victoria Falls and then back through Botswana, stopping at Chobe and the Okavango Delta. We finished up by making a journey down to the Western Cape, stopping at Kimberley on the way there. We finally scaled Table Mountain after our fourth visit to the Mother City and soaked up all the pleasures and warm sun that Cape Town had on offer.

We headed straight back to Johannesburg where Alisa and I packed our things, with me setting off back to DC and Alisa heading off to Kenya where she would live and volunteer for another four months. The two months in South Africa by no means went quickly. In fact, we never spent more than 3 nights in one place for our entire stay. Being constantly on the move with all of our possessions (and the many we acquired along the way) become a physical and mental exercise in organization and mobility. We are indebted to our dear friend Elna, who allowed us to stay with her while we were in Joburg at her home. Without her, we would have gone broke much sooner and would not have had a place to be able to use as ‘home base’ for our less mobile belongings and Alisa’s Kenya supplies. While Elna was out standout star, by and large our experience back in South Africa topped our 6 months of study and travel in 2007 while going to the University of KwaZulu-Natal, in Durban. There was a certain electricity in the air, as 6 years of built up of excitement could finally be unleashed. South Africa is always at it’s best when hosting massive international sporting tournaments, though I’ll always wonder how it might have gone had the national team, Bafana Bafana, not crashed out in the group stage.

Alisa and I parted ways at OR Tambo, she flying to Nairobi; me back to Washington DC. I returned to work and quickly packed for Los Angeles. Having relied on each other for so much for so long meant that our first weeks in Kenya and Los Angeles were challenging not just for the cultural adjustments, but being on our own in completely foreign environments. In the end, after 115 days apart (as noted by the Twitter app on the iPad Alisa took to Kenya with her) she returned to California where she’s now residing while applying to graduate school for next fall.

For me, surviving the last third of the year while juggling school and work, trying to survive the high cost of living of West Los Angeles, and trying to get back into an academic setting has meant that life has been at a constant race since I left for South Africa in May. However, I’ve learned lots from the experience and am enjoying the fact that there’s purpose in my life now, rather than simply applying for jobs and interning for free in DC.

2010 was a year that could have gone horribly uneventful or could have been terribly memorable. Thankfully it was the latter. Some of it was due to a little luck and timing, but the rest was because of the people who helped contribute to the adventures that took me to South Africa and finally to Los Angeles. The people who gave encouragement when the future was bleak in DC, and those that helped make the trip to South Africa unique and memorable. I hope to be able to repay those contributions by building upon the experiences and relationships in the years to come!

Check out the links in the text above for a ‘Best of 2010’ and use the links at the top of the page to check out what work I’ve produced for school that’s African related.

Soccer Stories Of The Year: Not Even Sepp Blatter Can Overshadow Landon Donovan, Lionel Messi, Spain In 2010 – SBNation.com.