We woke to the sound of someone yelling “TEA, COFFEE” early this morning on the Shosholoza Train. I thought it was insanely early for tea or coffee, and when we had a knock on our compartment’s door I pulled myself out of the cocoon of my sleeping bag which I had slept in on the bench with my backpack as my pillow. This would have been a fine set up, except that I had tried to sleep on my side and destroyed both of my shoulders. I find this out as I rise and move to unlatch the door. I find the Train’s conductor standing there, the same stout woman who was kind enough to upgrade us to the 4 person compartment yesterday. She calmly tells me that we are on the Orange River and that there has been a derailment ahead of us and that we are waiting for the repair crews to finish their work before we proceed. I ask her when we should be on our way, and she says she’ll return with a time estimate shortly. I fall back on the bench and realize that Alisa had pulled the hard plastic shutters down on our compartment’s windows which made it seem much early in the morning since our cabin was completely dark. Opening them let a whole bunch of light in, and my watch showed 0730, so we both start to climb our of our warm self-made beddings (bedding and sheets were offered upon boarding the train, but we declined).

We eventually began to move in the next 30 minutes, and were soon on our way and eventually hit Kimberley around 930. Considering where we were when we fell asleep and considering the conductor had come to give us a reason for us not moving, I began to figure that we had been stopped for sometime by the time Alisa and I woke. Neither of us remember the train moving when we had woken up briefly during the night. However, we continue to watch the veld go by, and take in Kimberley as we go by. We’re able to see the De Beers mine, which is the to east of the Kimberley mine, so we’re able to chalk up one more sight in Kimberley. Some passengers disembark here in Kimberley from our car, the first we had seen. We assume at the other stations we had called at that most of the hustle and bustle was happening on the sitter cars. 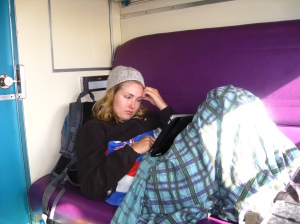 Alisa reading on the iPad on Shosholoza

Alisa shuns Harbor Master to read further in her compelling book, The Help. I catch up on our day’s recording of events, the completed days that can be seen here. We were able to use the power outlet for the Macbook Pro and iPad, even though is said shavers only. Bizarrely, the plug was an American two prong outlet, so I figured no one else would be using the power, so we wouldn’t cause too much of a drain. As we get closer to Johannesburg we seem to be at a crawl, hitting major towns every hour, when they would take 20 minutes to drive. We alert Elna that we are going to be delayed, but not sure the time. 1500 comes and goes and we’re not yet to Orkney and I predict at least another three hours. However, when 1600 came and we were given complimentary grilled cheese sandwiches, I was beginning to doubt my estimate. When, Elna SMSes back that they are having car difficulties, I think it is perhaps not a bad thing that we’re arriving late.

Joburg comes upon us quickly even though it was another three hours and we SMS Elna that we’re arriving now. We pull into the station and quickly gather our stuff. It is amazing that we’ve now been aboard for 31 hours, yet have none of the drain that a bus ride of half the time would have taken. Certainly have the ability to stretch out with a bench for each of us, and having ablution facilities and a power outlet made the trip so much more comfortable than bus, or even plane. It was R330 for each of us when you split the cost of a coupe. Considering what a plan flight would cost, and the cost of a luxury bus, if you have the time built into your trip to take the train, we would both highly recommend it. For us, it was the final mode of transport we have taken in South Africa. Having done the bakkie, hired car, mini-bus taxi, coach bus, luxury bus, domestic airlines and ferry, the train had to be one of the best bang for your buck experiences. 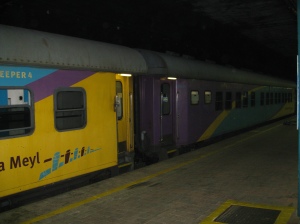 However, arriving late made the rest of the evening a bust, as we arrive home unload our stuff, head to the Engen that has a mini-Woolworths to grab enough ingredients to finish off our pasta and sauce, and sit to watch Monk and Psych to cap off our day. Tomorrow is an important one as we both pack for our flights. We need to get Alisa some last minute supplies, so we’ll likely be headed towards the mall one last time. Hopefully we’ll also be able to get Alisa one last meal at Bangkok Wok.

1 thought on “Derailment Slows Shosholoza, But Not Our Enjoyment”