A recent search on the Google search engine has brought an exciting discovery to The African File. In a recent report by IDASA, the Insititute for Democracy in Africa, their work noted The African File’s Impact of Economic and Political Sanctions on Apartheid as a source in the footer. Despite the 4300 hits that article has received in just over two years, this is the first time it has been mentioned in a scholarly/professional article.

The report covers Zimbabwe, and as can be seen below, the article is referenced as the source for:

sanctions are believed to have brought the South African National Party to near bankruptcy and encouraged it to negotiate.

Thankfully, IDASA did not make the case that economic sanctions alone brought the National Party to the bargaining table, and even included a mention for sport, which I made the case for in Sports Diplomacy and Apartheid South Africa.

The full report can be read here and the pdf can be seen here.

This year has been one of fantastic adventures and difficult challenges. Alisa and I began the year in Washington DC having started entry level jobs at the most innovative technology company on the planet, but with no real plan for the future other than to save up and return to Africa, where hopefully we would find employment. When the email came from FIFA on the 5th of February notifiying me that I had won tickets to all the matches I had submitted for during the random drawing, it gave me what I thought would be new purpose to life. I finally had confirmed tickets to return to the country I had fallen in love with only 3 years earlier. It would finally give me a reason to book my plane tickets and set off, hoping that Alisa would tag along for the World Cup part even though she sought to find a ‘real’ job in Washington DC. The year took on new meaning when just seven days later, I received another email accepting me into the African Studies Program at the University of Califorinia – Los Angeles.

I had lost hope of getting into graduate school when I saw my GRE scores flash on the screen the previous December. I thought I had blown my money on apps and the test as well as the chance to improve my chances for ‘real’ employment in the near future. So when UCLA sent the confirmation email of my acceptance, I was relived and surprised that I had got in. That surprise grew when just a few weeks later I learned that the Masters of Public Diplomacy at the University of Southern California had also extended it’s acceptance letter to me. Suddenly I had a reason to return to the United States after the World Cup, and I set out to convince Alisa to embark on this journey of a lifetime. END_OF_DOCUMENT_TOKEN_TO_BE_REPLACED

On 9 July 2010, the San Francisco Giants were 45-41, but 5 games back of the NL West leading San Diego Padres and were 9th overall in the National League. They had just lost to Steven Strasburg and the Washinton Nationals in DC, with Matt Cain giving up 8 runs, 7 earned in just 6 innings to the Nationals that would eventually finish 69-93, 28 games out of first place.

Also on that day, I was disembarking a train in Victoria Falls, Zimbabwe accidently leaving my one and only San Francisco Giants hat on that train, losing it to the continent of Africa for good. Because my head rarely fits baseball caps well, the perfect fit that this one provided made me quite disheartened over the loss. This was accenutated by the significant history this cap hat witnessed in its lifetime. But in the end, perhaps it ended the drought of my hometown ball club.

END_OF_DOCUMENT_TOKEN_TO_BE_REPLACED

Since we have such a backlog of days to catch up on our blog we will make this post a reference to help catch up on our journey from Johannesburg to Victoria Falls and then back down through Botswana.

Here are some of the best photos from the journey as well: 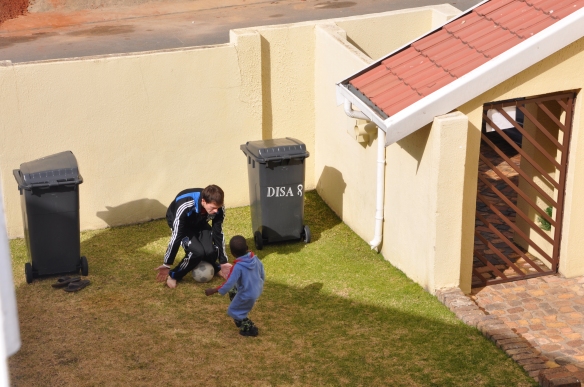 Soccer with the Visitors in Elna's Yard

Alisa and Alex at Victoria Falls

My Tweets
Join 548 other followers