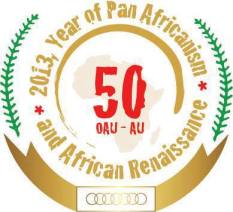 I was fortunate to spend Africa Day 2013, the celebration of the founding of the OAU, at the South African Consulate in Los Angeles. This year had special meaning as it was the 50th anniversary of the founding of the precursor to today’s African Union and was an opportunity for the African community to come together to hear from a distinguished line up that spoke of the potential of the next 50 years. Congresswomen Maxine Waters spoke, drawing significant applause; Councilman Mike Gipson from the City of Carson awarded certificates, Consulates from Egypt, Kenya, and South Africa sent representatives; and two professors from CSU-Dominguez Hills gave mini-lectures.

I went without knowing much of what to expect of the rhetoric. With South Africa gaining the AU Commission’s chairpersonship of the last year, the Republic has much to gain through the promotion of the AU if Dlamini-Zuma is able to ‘clean up’ the organization and help it flex its muscle on the continent. That also may have been reflected in one of the themes of Africa Day 2013: African Renaissance (the other Pan-Africanism). This was a major theme of Thabo Mbeki’s foreign policy but one that hasn’t been pushed forward since NEPAD has faded. 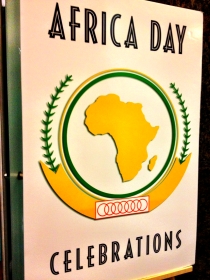 The day’s news coverage was generally positive about the AU, but there are many who are writing about the gap between the AU’s promise and its action (see links at the end). Among the critiques is the organization’s inability to solve the latest conflicts on its own: Cote d’Ivoire, Libya, and Mali all required international intervention (notably led by the French) to bring about stability. But the organization has had success in Somalia, with signifcant foriegn backing. Furthermore, with South African forces headed to DR Congo with a more aggressive posture than a simple peace keeping role, this may be the beginning of a more active AU. Still, there are political problems in places like Madagascar, Guinea Bissau, and the Central African Republic that will require the AU’s non-military attention if it is to gain a reputation as a leader in conflict resolution.

What I listened for in all the Africa Day speeches were the statements on engaging civil society and the youth. END_OF_DOCUMENT_TOKEN_TO_BE_REPLACED

Part of the raison d’entre for public diplomats is the creation and distribution of memes. Most of us know memes as the cat pictures with big bold text on them discussing their need for cheeseburgers. But the pre-internet definition of a meme went like this:

an element of a culture or system of behavior that may be considered to bepassed from one individual to another by nongenetic means, esp.imitation.

This is a critical piece of the public diplomats’ toolkit because their tasks are to disseminate ideas and values that represent their nations, employers, or clients. This is not an easy task, and it is made all the more difficult by the difficulty of measuring the success or failure of memes. How well do people associate Nike with great athletics? How well do people in Africa associate democracy and civil rights with the United States? Does China’s articulation of a ‘peaceful rise’ achieve the geo-strategic goals in their foreign policy?

These answers are a bit ephemeral because of the shifting perceptions, and are often only analyzed in retrospect, or when the public can subconsciously agree as a ‘whole’ that a certain meme is associated with a certain brand, country, or person.

Recently, there have been many newspapers (The Economist), magazines (Time), and 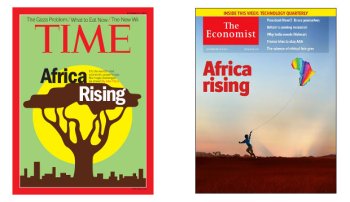 writers who have hailed the ‘Rise of Africa’ in the past decade. These analyses often look at the massive growth rates in GDP that African countries have sustained and they see hope for the future, especially when contrasted with the stagnant or non-existent growth in North American or Europe. This meme has been credited with increasing the focus on Sub-Saharan Africa both in the business community as well within the foreign policy community.

This ‘Africa Rising’ theme was challenged in a recent Foreign Policy article (The Myth of Africa’s Rise), that has stayed in FP’s Most Popular list for over a week after its publication

(it is currently ranked 6th). I’ve had it bred into me at USC to always research the author of any piece I read, and that habit revealed an interesting piece of info: it’s written by an author (Rick Rowden) who it appears has rejected the Washington Consensus on economic development (see his book on the Deadly Ideas of Neoliberalism) but is not an economist, not an Africanist, not a political scientist, and not a public diplomat, which may account for the frame of his thesis:

The measures of development (GDP, consumption, and trade) are wrong.

It is a claim that goes against 50 years of development work, and may in fact be a needed critique to development studies. However, Rowden doesn’t go down the path of most who attack GDP and other monetary based measures do. He could have explored the Better Life Index, the Green GDP, or simply argued that GDP and its like can’t possibly ascertain Africa’s geo-political position and whether the continent has grown more powerful in international relations. No, Rowden instead says that industrialization is the primary way to measure growth. And his rationale? Because all the other countries who grew first (the West),first industrialized in their development stages. This cross temporal comparison is shocking, because it basically makes the argument that there is only one way to growth a national economy! Which contradicts his argument against the use of neo-liberal economic markers (GDP per capita, consumption, and trade) to measure growth!

For the sake of Rowden, let’s take his rhetorial frame as not so ludercrious, and operationalize his ideas about growth. END_OF_DOCUMENT_TOKEN_TO_BE_REPLACED 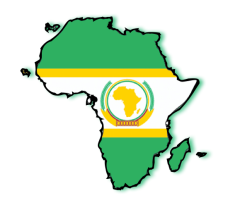 My latest project originally sought to understand African diplomacy from a true realist IR perspective. Of course that’s ironic, because IR realists rarely acknowledge the pull or influence that diplomacy (or Africa) has on the IR field. My goal was to understand if there could be any benefit to African nations by pooling their diplomatic representation through a body such as the African Union, rather than conducting their own individual missions abroad. Why staff a small embassy with inexperienced diplomats when a nation could leverage the power of the entire continent and have the best and brightest African diplomats representing their collective needs? Again this runs a tad contrary to realist thinking who usually dismiss the supranational organizations of the world of holding any real power. However, I’m of the believe that in the future these bodies will be the real power holders in IR theory and practice.

Of course, this idea of a African foreign service would sound very similar to the European External Action Service that has come into being with the signing of the Lisbon Treaty in the European Union. There are now two tiers of European diplomacy: national diplomats from individual countries & EU diplomats representing the organs of the supranational body. The African Union, while modeled on the EU in some circumstances (though it was mostly a recasting of the Organization of African Unity while combining the economic capabilites of the African Economic Community and taking its mandate and supplanting it with NEPAD), the AU has yet to develop a pan-African diplomatic service. Thus I was very curious if there would be a way to argue for and against such a diplomatic organ of the AU. As it turned out, predictably, there is very little research into this idea, and while I had thought to expand my comparison to ASEAN, most papers focused on the integrationist desires, not the benefits of a collaborative foreign service, that diplomats or the diplomatic corps in supranational capitals (Brussels, Addis Ababa, and Jakarta). Thus I turned to the wide ranging literature on regional integration for my project to see how the move towards integration on the continent compares to the EU and ASEAN and what impact that would have on the respective diplomatic powers. 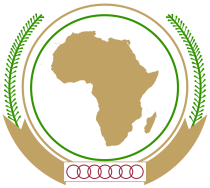 END_OF_DOCUMENT_TOKEN_TO_BE_REPLACED

The WordPress.com stats helper monkeys prepared a 2012 annual report for this blog.