A late start today meant that the Museums in Newtown must wait for our return to Johannesburg. A last load of laundry was done as we don’t know the next time we will have that access, and a quick cook up of the ‘minced’ meat that we seasoned with Taco seasoning and sour cream, inside terrible burritos. We thought it a novelty to try out the latest in Mexican food here in South Africa, as we had famously made a large serving of Mexican food while in the dorms at the University of KwaZulu-Natal in 2007. This could not  be topped by our attempt, as the ‘Mexican’ rice was quite a disaster, and the taco seasoning though in a similar package to that sold by El Paso, did not taste like much.

It was a bit surprising in the Pick ‘n Pay (the large supermarket chain started in South Africa and now in many African countries), that the selection has changed very little in the three years we have been out of the country. On a whole, the three major chains, Woolworths, Pick ‘n Pay, Checkers, all draw their products from both the UK and the United States. In most cases it is the best of both worlds (cheap prices on Cadbury Products as there is a factory in Port Elizabeth) and Activa yogurt. However, there are curious absences, such as no tortilla chips or dry stick deodorant. Most stores also seem to plan to sell most of their bakery and dairy products on the same day, as when you enter a store in the evening, the shelves of loafs of bread can be near bear and few bottles of milk left in the dairy section. It is rare to see a large trolley of bread at the checkout as we have seen most South Africans seem to buy what they need for the day, or only two days out. Though we did see a checkout total of R1000 (150 USD) the other day, so perhaps trends are changing. 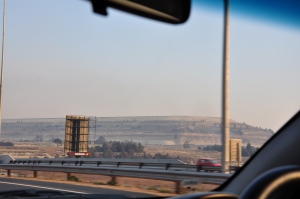 We packed the car and set off for Kroonstad with us getting on the N1 (the West side of the Johannesburg beltway) and as we rounded the city to head southwest, we drove past the Rand and the giant mounds of dirt that has been piled along the Rand that came out of the ground. I had never seen these up close, and to marvel at the amount of earth that has been taken out of the ground over the past 130 years is quite impressive. I have hoped to visit one of the mines, and was told the city’s theme park, Gold Reef City, is build on an old mine and offers the chance to go down one of the old mine shafts. However, we have discovered on Lonely Planet’s website, that they have a contact for someone who can arrange for people to accompany an investor tour of a live mine for around 100USD. The website stressed that it was a physically stressful and claustrophobic, but how great would it be to see a working mine here in South Africa? The mines have meant so much to the country. They are the reason many Europeans came and stayed, the reason for the mass migration of African workers,  the reason for the formation of the labor color bar, the primary reason for the formation of Apartheid and also its collapse, the reason for South Africa’s great wealth, and indirectly for the World Cup being hosted here in South Africa rather than Morocco, Nigeria, or any other country on the continent. We still don’t know where we’ll be headed after the second round knockout game we have tickets to in Bloemfontein, but hopefully if we get the chance to spend some more time in the Gold City we’ll get to head underground and into one of the mines.

On the road to Kroonstad, the N1, it took us through two tolls, one costing R41 as we headed out of Gauteng and entered the Free State. The highest toll we have ever payed, and then we found out what that bought us: a alternating three lane highway. Every 2.5 kms the lanes would alternate between one and two for each direction of the highway. This way faster vehicles could pass slower trucks on the road rather than the slower vehicle to drift into the emergency lane and have the faster car pass in the middle of the highway. This was how we navigated the N12 in the Rustenburg region and also along the road to Namibia out of Cape Town and also along the Garden Route. While utilizing the emergency lane is a proudly South African style of driving (copied in Namibia, but no other Southern African countries we have visited, probably because these others lacked emergency lanes altogether), it can be a harrowing experience when passing a truck at night when the high beams of other cars zip by your car from the lane to your right. Alisa particularly doesn’t like this as she gets to see the wheels of the truck up close, but this practice is widely known and the travelers in the opposite lane often drift a bit into their emergency lane to make sure this process can occur safely. Thus, the three lane design of the road to Bloemfontein made traveling much easier and safer.

We witnessed an extremely long sunset as we drove down from the highveld (pronounced high-felt) and Alisa got some nice snaps of it as we drove. We also crossed out of 3G coverage for Vodacom, which was a tad surprising given the size and scope of the company in South Africa, but again we are spoiled in the United States by our coverage areas. We were considerably outside major population centers (there was no a large town on the entire route between Soweto and Kroonstad) though I’m sure in the United States this would be lamented by many as a major failing of a telecom company.

We took a long dirt road off a secondary road after leaving the highway once past downtown Kroonstad, which looked to be burning, with all the smokestacks and bush fires alight. Bush fires were a common view along the road. We were not sure if this was a farming technique because we are passing into the dead of winter, or whether this was a brush clearing project by the South African roads department. However, we find a long one story house at the end of the road where no lights were on, bar the carpark at the end of the house. This turns out to be our B&B, La Porte Vase.

We have found this common among our last few stays, that there are no lights or no sign directing us to where we find our reception. We find our hosts of the B&B and are shown our room, which Alisa finds delightful (especially the electric bed warmers) 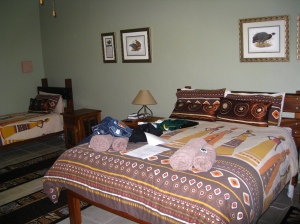 , and request breakfast at 9am, which draws a quizzical reaction from our hostess. We realize after that perhaps the time is a late start by South African standards, but then again this would theoretically be a rest stop for people on holiday who would normally be making late starts to their day, but perhaps that’s just an American cultural norm.

Tomorrow is the day South Africa is needing a miracle bigger than the transition to multi-racial democracy that occurred at the beginning of the 1990s. South Africa needs to beat France, and then hope that Uruguay beat Mexico. However, those results alone won’t assure qualification. Currently Mexico has a Goal Difference of +2, while South Africa has -3. Thus the results must go South Africa’s way, plus they must make up that Goal Difference with Mexico in order to advance. The most likely of the impossible scenarios is that South Africa wins by 3 and Mexico loses by 2. This would make then even on 0, however South Africa would likely advance by the third tie breaker: Goals Scored. The games will be played simultaneously so hopefully they post the score in the other game, but surely someone will have a blackberry or iPhone nearby and can pass on the result from the Uruguay – Mexico to let us know if the impossible has a chance!