Today we departed Hurlingham Manor early with Elna to get a ride to Park Station. She had a appointment at Wits University (or Univ of Joburg), so she was kind enough to give us a lift for our morning bus ride to Kimberley. We were going on our fifth week in South Africa and had spent much of our time in Gauteng with Elna. But it was on this ride to the train station we learned the most about her. She had grown up in Mafikeng, a border town with Botswana, where her father worked for the train company. She told us one of her earliest memories about Mafikeng was her out on the traintracks watching black migrant laborers heading to the Rand. One of the passengers had spit out a massive piece of chewing gum. Elna picked it up and chewed it, whereapon her mother found out what she had done when she arrived home and proceeded to wash her mouth out with soap. Elna seemed to make it seem that it wasn’t necessarily picking gum off the ground and eating it, but the fact that an African had been chewing it that was the part that needed cleansing.

It has always been of interest to listen to white South Africans, especially Afrikaners for their memories of the second half of the 20th century. They’re made out to be such vile and racist people, yet they were very similar to white Americans of the same era. She remembers that in the neighborhood she grew up there would be a siren that would go off at 9 or 10 at night, signaling ‘white by night‘, meaning that the white areas were to be cleared of non-white people in 15 minutes.

She talked about her being ‘different’, which she attributed to being a red head and thus always on the peripheral and being teased. It was interesting that she associated it to something genetically, and that there was no ‘light-bulb’ moment nor any ‘rewrite’ of history which is common among the people that apartheid made privileged. For someone who got all of their South African history knowledge from books and lectures, talking with Elna is like having access to a whole treasure trove of first hand accounts of what life was really like during and post-apartheid. With South Africa often said to be on the same history track as the United States, just 40 years behind, it is often a way to think about my own country’s history. People of my generation have a hard time accessing a broad population that has vivid memories of segregation pre-WWII and immediately following. Even though it continues today in some form, just like in South Africa, Americans are much more reluctant to talk about race and what it used to be like. While South Africa provides a glimpse, it also makes myself as a white America, think about what the US might become if white/’Europeans’ become the minority….

The most relevant anecdote that Elna told us, was how Park Station used to be quite a fancy place, and that downtown Johannesburg was a fashionable place to visit, as she and her mother would put on white gloves and that they would arrive at Park Station and go for sandwiches. Quite a day out on the town as Elna told it. Quite a stark history compared to what downtown Johannesburg has become in the past two decades and the area around Park Station. Park Station, while still one of the places that makes a top 10 of dangerous spots in the city, Alisa and I have developed a certain amount of comfort with being dropped off around the station. However, nearly every time we spend significant time there we are approached by poor, white, people, or travelers, also white, telling us of a recent mugging outside and needing rands. No doubt, some are semi-truthful but most are undoubtedly scams for unassuming white/European/American travelers.

We boarded out Greyhound bus with a few other passengers. It was by far the least crowded bus I have ever taken in Africa. Perhaps a dozen, a scattering of black and white boarded, and notably no foreigners. Greyhound, though behind schedule turned out to be the luxury liner that it is rated. We cruised to Kimberley and were able to arrange pick up from our guest lodge while in route. I thought had I had blown it when not responding to their email the night before about when we would be arriving, but I sent out an email from the iPad as we barreled south. I quickly received a reply to call when getting close and someone would come to fetch us. Quite remarkable that the ‘high-tech’ communication employed paid off for our benefit today.

The bus dropped us off in a small bus circle near the mine complex and a women pulled up in a Mercedes and proceeded to walk past us into the station, and everyone else that disembarked melted away into the city as the winter sun began to set. The lady who owned the Mercedes proceeded to walk back to her car though when she approached us, she asked if I was Alex, and it turned out she had been sent to fetch us. Or more like, she was the manager of the guest house and had come personally to get us. This kind of personalized attention was a bit foreign to us after two months on the continent, especially for an establishment, the Victorian Guest Lodge that had Mercedes.

We arrived and were shown to our room, which had a queen sized bed, a flat screen TV, and a very modern shower room. It felt a bit of a Halloween theme, with all the orange in our room, but it was definitely one of the nicer places we had stayed so far on our journey. I was quite proud as Alisa hadn’t been the most pleased with my choice of accommodation this go around in South Africa (see Gemini Backpackers). We got directions to the Big Hole and were told we would find places for dinner over there. Luckily the Victorian Guest Lodge backs up to the parking lot for visitors to the Big Hole and we were quickly onto the complex. It was cold and quiet, and we were the only people walking around this complex created to replicate what a visitor to Kimberley would’ve found if they had visited during its heyday. We wandered and since everything was closed we had to pick where to eat: a pub, or an upscale place. Both served local, time appropriate fare meaning each posed it’s own risk.

We decided on the Blue Lace Restaurant and it was quite an interesting meal. White napkins and candle light, we were the only patrons until there was a large commotion in the bar area. We slowly dined on our fancy meal, and afterwards we headed out of the restaurant where 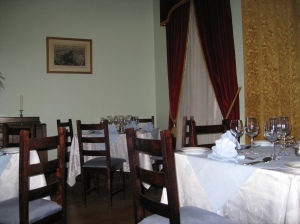 Inside the Blue Lace - The Big Hole

darkness had fully come. Alisa had wanted a picture on the cable car that was used to move people between downtown Kimberley and the Big Hole, so we headed out towards it. However a film set had taken it over and there was singing and dancing going on. We stood and watched, when the owner/chef of the Blue Lace restaurant walked up to us and told us about what was going on. The performer was Emo Adams,

somone who the white Afrikaner proprietor said had the best moves he had seen since Michael Jackson. Feeling bad that we had never heard of someone that talented, who the owner said was a triple threat of dancer, singer, comedian, we decided to watch more to see if we saw greatness. After a little while one of the crew members came over to ask us if we would like to watch up close. I thought it was just a invite to come closer and being a cold night I wasn’t thinking of staying long but actually they had seats directly in front of the set where they plopped us down. I had never been on a film set before, so to wind up on the filming of a music video in the Northern Cape in South Africa, was quite an odd occurrence. I felt it was a bit awkward sitting there, but someone came up and started chatting us up soon after. She was the cousins of one of the dancers and told us a little about the music video. She was from and Indian South African from Durban, so didn’t speak Afrikaans well enough to tell us exactly what the song was about (Emo Adams is considered a Cape Coloured, a population who often speak Afrikaans as their first language). We watched almost 30 takes of the video, which encompassed only the first 50-60 seconds of the song. I was surprised that Adams didn’t sing at all and just mouthed the words, but it was very interesting to see how he and the director (using the same Nikon D90 that Alisa has) worked together to get the right shot that they wanted. It also showed me how the director would ask for the same type of movement but he would shoot it from various angles. 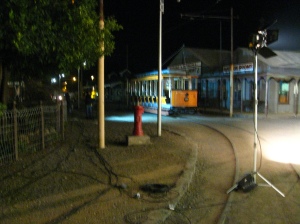 After a break Emo actually came over and talked to us, and I actually felt the star power eminating from him. However, he immediately came off as down to earth and after our chat with him, we watched a bit more before Alisa couldnt’ manage the cold any longer and we expressed our thanks and wandered back to our Guest Lodge.

We indulged in the wifi (paid) to upload photos and surf the web while in bed and watched TV. Quite the first world evening and quite out of the ordinary for us. We went to bed without any plan for the next day, but slept quiet happily having experience one of the most plesant days of our time in South Africa.

Below is the completed music video by Emo Adams:

(oddly enough, Emo’s slick dancing moves are cut out of most shots with the cable car)

1 thought on “Kimberley and Emo Adams”