We wake at 0630 in order to pack up camp, and I’m still wondering whether there is another game walk, as I could have sworn during our briefing there was a mention of some activity in the morning. But we take all of our supplies directly to our beachfront and load up the makoros. We wait for Dixon and are soon off.

Along the way I chat with Dixon about his villages soccer team, The Big 5, and his family. He also tells us that the government has placed a plan on any new construction of wooden makoros. I expect him to take this opportunity to ask for some contribution or for a piece of soccer apparel, but he doesn’t. He’s been professional throughout and Alisa and I have developed an actual friendship with him, that is rare in on time in Africa. So often your guide makes you feel like they are just buttering you up in order for you to give them something. I’m not found of this type of ongoing paternalism and have made it a point not to leave anything behind or give anything away to the men we’ve encountered. The exception I made was giving nearly 20 USD in call time to a young student walking the streets in Maputo on the day of our departure after I couldn’t get anyone to buy it. Immediately after doing so, one of the bus managers looked at me and said why didn’t I give it to him. I tried to give him my most disgusted look, and tell him that it was because the kid was a student. However, our relationship with Dixon makes me think that I should give him the ‘safari’ jacket that my mother told me not to bring home. It had proved valuable in the delta, giving an extra layer of warmth, and protection from the gnats that swarmed the water.

Upon arriving, I was still steeling myself for Dixon to ask for something and in effect ruin the relationship we had built. So we loaded all of our things into our truck, and I call Dixon over, asking him if his grandfather could use a jacket, and that he should tell him thanks for letting us use his makoro. Dixon seems take aback by the gesture, which seemed like a good sign, and he takes it with a smile. I start to wonder if it will actually reach the grandfather and Dixon puts it on and zips all the way up.

Dixon and Us at the end of our Delta Journey

However, we get him to snap a photo with us and with that our time in the Delta has ended, and we make our way back to camp. This time, I’m able to pass it talking soccer with one of the Australians. He was actually at the Tented Fan Village that one of the Australian supporter groups arranged in Durban.

Back at Delta Rain, Alisa has decided to upgrade us to a chalet for the nights, giving us a proper bed and also a charge point for our cameras and the iPad. We shower and wash the grime that had build up for the past two days in the delta off, and dress in clean clothes for our trip to the airport. We learn that Sarah, who had remained at Delta Rain with the truck had been infected with Malaria and thus we would be without her for the foreseeable future.

We pile in the truck and set off, despite us being a bit later than Jay’s 1600 on the dot. Some of the Australian girls make a note of this, and how they always used to be on time, in some way implying that the ‘new’ people are slowing them down. I wanted to tell her TIA, and I wondered silently how she has come from Nairobi without realizing that leaving 5 minutes early or late does not make a whole lot of difference in this part of the world. But I hold my tongue as I have only two more days with this woman.

We make it to the Maun airport, which is undergoing a massive runway expansion and we’re later told by Jay that they’re making this into an international airport, and once they do the trip will likely end here rather than continuing on to Johannesburg. 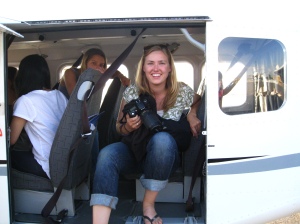 Alisa after our flight

We go through security and actually sit in the lobby waiting to go out on the tarmac to board our prop plane. Once out there and receiving the flight plan, I try to get Alisa into one of the smaller 5-person aircraft, but she makes a straight shot to the larger 7 person propeller planes. You an check out some of our best photos here. We see lots of wildlife, and Alisa’s zoom lense and DSLR comes in handy to snap the quick shots as we fly over. The people who brought point and shoots were relegated to turning off their cameras as theirs couldn’t focus fast enough to take a picture of any of the animals as we flew over.

Okavango Delta from the Air

We come back and all gather around for dinner. Lamp chops are the order of the night, and it’s the first meal that takes a bit of work to eat as I continually regret not owning a headlamp and are forced to have Alisa glance over at me to help chop of the lamb. Tomorrow is a big driving day with 700km to cover, so Alisa and I retire to chalet and pack for what is now our journey home to South Africa.

2 thoughts on “Flight Over the Delta”