The decision to go with an Overland Tour to complete our bucket list of places to visit in Southern Africa was one that we arrived upon late into our two months in the region, but in the end provided us an opprounity to visit places that would have been very cost prohibitive had we done it on our own. Victoria Falls was number one on Alisa’s list, and as I had wanted to take the opportunity to visit Botswana, we looked for a trip that would cover both of these. Since we were approaching the end of our trip, money was becoming tight, thus finding the right option, time and cost wise, was imperative. Our search was extensive, but Alisa decided on Kumuka Worldwide as our best bet because they fit the timeframe we wanted, had an affordable cost, and had openings on the upcoming trip. Booking last minute proved to be difficult with some of the other companies so we quickly made the booking at Kumuka as Alisa assured me that I would be able to buy Travel Insurance through World Nomads (Kumuka requires travel insurance, and it was very easy to purchase from World Nomads). Our trip from Victoria Falls to Johannesburg was booked, so now we had to get up to the starting point.

Our journey up north was exciting as usual, with a bus to Bulawayo and then the train to Vic Falls. We met up with our tour leader, Sarah, at our pre-departure meeting the night before departure and were excited to learn that our accommodation on the 11th, would be at Thebe River Lodge, where there would be a tv that we could watch the World Cup Final. The next morning we set off on a quiet ride across the border to Kasane, where after we got back from our game drive in Chobe National Park, we learned the basics of how to set up and take down our tent from our driver Jay, and saw how the group made and cleaned up after their meals. I was glad to see how conscientious the group was about washing hands, dinnerware, and food. I was also surprised how good the food looked (and eventually tasted). Sarah had told us the budget for this leg of the trip (she had come all the way from Nairobi) was high, but the quality was of the standard I myself would have bought for the trip. Our sleeping accomodation that night was not terrible, but we had somehow overlooked the need for a floor map. While Alisa tried to remedy this in Maun with a massive wool blanket, that is one item that we would reccomend packing even if it is a space eater. 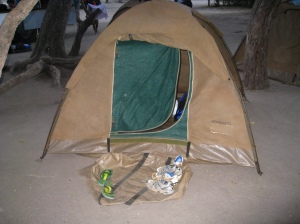 Our Camping Tent in Botswana

Our travel to Maun the next day went through Nata, and the early start time allowed us to get to Maun by lunch time. I wasn’t expecting the 5 and 6 AM departure times, but they definitely made a difference in our travel times. Sleeping on the truck wasn’t terrible and though the seats didn’t recline, having space to spread out was nice compared to the many bus journeys we had taken in Southern Africa. The other comfort came in the lack of anxiety about the dissappearance of our belongings. Traveling throughout Southern African on public transportation focuses you on keeping all of your belongings close, but now that we were traveling with a group of people that one, had as much or more expensive things (cameras, Kindles, phones, etc) as us, and two, this group would be with us for the next week so the benefits to steal were diminished. Feeling this relief made the trip worth it to me in itself. The competance of our leader and driver was of the highest class, which allowed me to travel while relaxing for the first time in Southern Africa. I had always been skeptical of overland tours because I believed that one wasn’t getting the full experience of life in Africa, and while you do miss out on important components like public transport and planning out your trip and solving logisitcal or culture problems on your own, after nearly two months in country, it was nice to sit back and relax, knowing I was going to arrive at my destination and all I had to do was read my book.

Once in Maun we prepared for our trip into the Delta. We were told to expect colder nights in the Delta than here in Maun, which made Alisa worry, as that night temperatures dipped below 0. I found this out when I made a dash to the shower rooms at Delta Rain at 0530, and found that no matter how hot the water got, I still shivered. I have always felt better on mornings that I shower, but I began to alter my feelings on that, and came to appreciate a later afternoon/evening shower later in the trip, as the sun would still be up and temperatures would still be above freezing. Dealing with the cold was a constant battle on our trip, not just through Botswana with Kumuka, but throughout our two months. Our family friend that we stayed with in Sandton had told us it was one of the coldest winters in recent times, and though we knew it would be cold, the constant and prolonged cold weather wreaked havoc on our immune system, combining the lack central heating in any of the places we stayed at during our time. We had enjoyed Vic Falls tremendously because of the balmy weather, but that was the only place I worked up a sweat in two months.

Luckily in the delta, temperatures were not as cold as Sarah had predicted, but that also may have been due to Alisa picking a spot for our tent right next to where the fire would be kept going every night. The tents themselves did a little to trap heat in, but we still slept next to each other for warmth on our entire trip.

Sarah had prepared us for the Delta by stressing that it was much more of a nature experience than a game viewing place. Alisa was dissappointed at this as she was desperate to see some cats in the wild, and had been expecting the 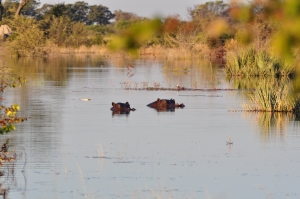 Hippos in the Okavango Delta

Delta to be a treasure drove of wildlife. Fellow backpackers in Vic Falls had also told her that the only wildlife they came across were the big spiders and other bugs in the Delta. However, we were treated to a good array of wildlife, from red lechwes, to elephants, to zebras, and hippos. At Chobe I had decided I had done my last game drive, but in the Delta I found that excitment that I had when in Liwonde, Malawi, that comes when seeing an animal in the wild at a marginally safe distance.

The Delta also provided us with some of our best meals as Jay proved himself to be an excellent cook, with his french toast and creamy pasta standing out. Our guides in the Delta were professional and very informative, though their usual good time management skills were disabled by Jay’s french toast, leading to a late departure in our morning walk, which meant we saw very little wildlife out and about.

Upon arriving back in Maun, we learned that Sarah had been infected by malaria, which in the end ruled her out from returning from participating in much else on the trip, though the final two days were simple driving days to Johannesburg. However, Jay really stepped up and led the group well through the final two days, and he certainly kept up the high standard Sarah had set. He managed our time well on the way back, and even put us across the South African border one day early, putting us 40kms closer to our destination.

Alisa decided to upgrade us that night to a proper chalet, which both of our sore bodies needed. This was a opportunity that I didn’t expect having only glanced at their website. Talking with the group that came from Mozambique, they said the possibility to upgrade to a bed/chalet was on offer nearly every night. While this does incur an extra cost, the ability to have this available would make a difference if I was to do another overland.

Finally making it back to Benoni, we disembarked the bus and felt that while our trip had been a success, we had only just started to integrate into the group. Part of the experience of an overland bus is the relationships made while riding out the long journeys. We had been integrated into two groups, one from Mozambique and one from Nairobi, meaning that Alisa and I, were a bit of outsiders to the group. We commiserated this with a couple from Austrailia who met up mid-trip at Vic Falls, and found that even the other people on the tour noticed that it was a bit difficult for us to be just thrown in and expect to know how everything is done on the truck. In the beginning this had caused our offers for help to be turned down by the more experienced overlanders, and while this was to be expected, it led to a lot of standing idlely while others were completing tasks such as cooking, cleaning, truck maintenance and the like. By day 6 and 7 we were able to really pitch in, which is where the Kumuka trips differ from our Overland companies we have read about. The expectation is that everyone pitches in with the daily tasks, and while Alisa and I wouldn’t have it any other way, it’s important to note this fact. We just wished we had been able to contribute more.

In the end, Kumuka dispelled a bit of my incredulity of overland tours being able to show you Africa. While, I would never travel that way exclusively, at the end of a two month trip where we were constantly on the go, the Kumuka trip was exactly what we needed (though our backs didn’t thank us after 6 nights of sleeping on the ground). The tour itself also debunked the comment that almost drove Alisa away from Kumuka, but I convinced her to ignore because it was dated and isolated.