I was recently asked to rate the world power’s amount of soft power around the world. The choices were between China, the EU, the United States, and India. Coming from the perspective as an African specialist, I drew this conclusion that caught some of my colleagues by surprise:

It is the country of India that has the highest potential for soft power deployment in emerging markets, specifically in Africa for the following reasons: 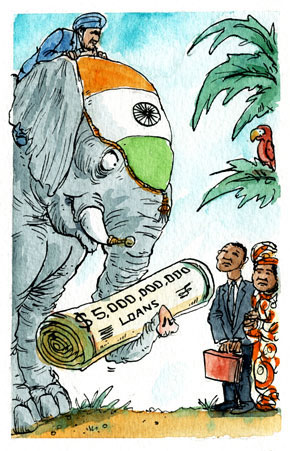 India & Africa (From The Economist)

This contrasts with some of news stories that show that India is trying to match China with developmental resource-backed loans. However, the ability to relate to one another culturally will be more important in the long term success of engagement with the continent than how big of a loan you can offer.

Here are some noteworthy India in Africa news stories of late:

My most recent paper got some twitter promotion by some of the big names in the ICT world. First, my paper got into @ICT_Works and was published in their ICT4D Daily:

Between these two Twitter feeds, there are 10,000 followers. When I saw that they had retweeted my story, I expected a flood (or at least close to 100) hits coming through the link to my most recent paper, The Cloud and Africa – Indicators for Growth of Cloud Computing. Alas, not a single follower (according to WordPress’ statistics) of those twitter feeds clicked on my link to read my paper.

The reason I had been so excited about this paper  was the originality of the idea. I had never written a paper that was so quantitative heavy, but I had to go that route after I found the literature of Cloud Computing to be limited in the development sense. The few mentions of cloud computing in developing markets focused on India and China. So with the limited amount of data, I had to hypothesize and use what I had learned in class to make a prediction. One of the biggest things I’ve learned while being back in academia the past year is the proliferation of the fear of prediction making. So I decided to buck this trend and create a database that would predict which countries in Africa were most likely to embrace cloud computing as a development and economic solution. What resulted was a table that formed the basis for my Cloud Readiness Index. Certainly, it is not anything that would withstand academic review, but something I thought that could be a good conversation starter and one that could provide information to policy makers and businesses on which markets to examine further to determine if they would adopt the model of Cloud Computing.

My class presentation is here.

The table can be seen here.

My paper is linked to here

I’ve been brainstorming lately of a project for my thesis that would combine my interests in technology and politics on the African continent. With last semesters’ research into deregulation of African ICT, I want to focus on something more current. With the current events in North Africa being partially attributed to Twitter, Facebook, and the like, I want to see if Social Media and the ICT that powers it can have any discernible effects on other parts of the continent, specifically Sub-Saharan Africa, where there has been no spillover of the democratic movements. Thus with 17 presidential elections happening on the continent south of the Sahara this year in Benin, Cameroon, Cape Verde, Central African Republic, Chad, DRC, Djibouti, The Gambia, Liberia, Madagascar, Niger, Nigeria, São Tomé and Príncipe, Seychelles, Uganda, Zambia, and Zimbabwe there would seem to be a large sample size  to gather data about ICT and Social Media’s impact on elections. But how to measure this impact? What indicators would I need for ICT and elections? Are these countries a large enough sample size, or should it be expanded to countries where ICT data is more readily available but are having only Parliamentary or Local elections? Or perhaps this should cover 2011 and 2012? With the massive growth of mobile phones on the continent, and more landings of fibre-optic broadband cables, using this connectivity for good governance could be a critical feature of studies on the continent in the coming years. END_OF_DOCUMENT_TOKEN_TO_BE_REPLACED 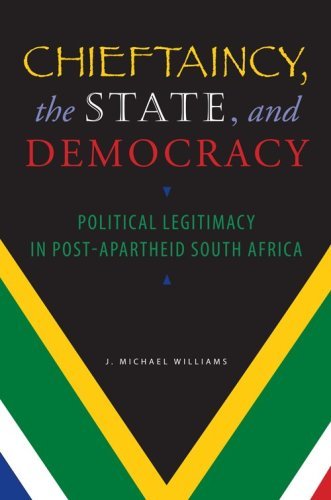 In J. Michael Williams’ Chieftaincy, the State, and Democracy: Political Legitimacy in Post-Apartheid South Africa, the relationship between the new South Africa’s sources of mixed authority is examined through field research conducted in rural areas in KwaZulu-Natal around the turn of the Millennium. Williams tells of an ongoing struggle in South Africa about political legitimacy between the state and chieftaincy regarding which institution has the right to exert authority in rural areas.

Williams focuses on how the chieftaincy seeks to establish and maintain its political legitimacy with the local population as well as the state in the post-apartheid era. Through comparative case studies he analyzes specifically on how chieftaincy and local populations have negotiated the introduction of specific norms, rules, processes, and institutions that are fundamental to the ANC’s policies of transformation and democratization.Through a framework that Williams calls the multiple legitimacy framework, he seeks to show how the chieftaincy has sought to establish and maintain its authority in the midst of these political changes. With chieftaincy still a central figure in the lives of rural communities in South Africa, the examination of the complexity of the chieftaincy-state and chieftaincy-society relationship that have formed and continue to evolve in the post-apartheid world.

Williams says his analysis is necessary because current assumptions about legitimacy conclude that power will eventually reside in the government as democracy and local government become more ingrained in society. He uses his framework in understanding the results from three case studies in the South African province of KwaZulu-Natal and supplements the data with national economic and survey data from other authors in the field. While stopping short of drawing empirical generalizations, he seeks to use his analysis to tell the story of real South Africans who deal with the struggles of the post-apartheid political structure in their daily lives.